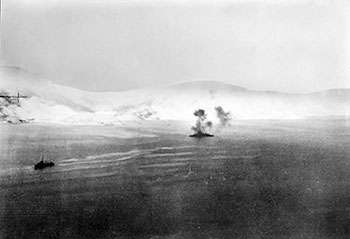 A fierce engagement between German and British naval forces in the second battle of Narvik at Jassing Fjord, which results in the sinking  of 8 German destroyers and a U-Boat whose surviving crews join Gebirgsjager units defending isolated Narvik.

1941
British Naval forces, this time supported by the Battleship HMS Warspite, again engage the German naval forces located at Narvik in the Jassing Fjord. This, the 2nd Battle of Narvik, results in the sinking of 7 German destroyers and a U-boat whose surviving crews join Gebirgsjager Â units that are defending isolated Narvik.

German forces launch an attack against the Greek and British positions near Mt. Olympus. The Italian 11th Army in Albania begins to push the Greek Army back.

German advance spearheads capture Sollum. Rommel receives orders from Berlin that he is to consolidate on the Egyptian frontier and concentrate of capturing Tobruk. Only then will he be allowed to push into Egypt. The result of this order is that Rommel decides to rest his exhausted troops and wait until the 15th Panzer Division arrives at the end of May before making a major assault against Tobruk.

Japan and Russia sign a 5 year non-aggression pact, which all but removes any military threat to its northern borders.

1942
The US destroyer USN Roper, sinks U-85 south of Norfolk, Virginia. This is the first success of the war by a US warship against a U-boat.

Fighting continues on Cebu Island, as the US-Filipino garrison withdraws in to the hills.

1944
Simferopol, Feodosiya and Eupatoria in the Crimea fall to Red Army.

1945
A local truce is declared near Celle so that the British Second Army can take over the notorious Belsen concentration camp. The U.S. NinthÂ Army clears the Duisberg Pocket. The US Third Army captures Erfurt and Weimar.

The Chinese launch a new offensive in Honan and Hupeh provinces of Central China.

The U.S. Fleet begins the pre-invasion bombardment of Ie Island in the Pacific.