Today is  the anniversary of the first day of Operation Market Garden (A Bridge Too Far), the ill-fated Allied attempt to cut through the Netherlands to Germany and finish the war by the end of 1944. The operation has always been a contentious topic. Some people say it was doomed from the start due to arrogance, poor planning and numerous mistakes. Others think it was a bold but reasonable gamble that did not happen to pay off. Either way, we would like to commemorate the men who fought in the operation by giving a brief overview of what happened. 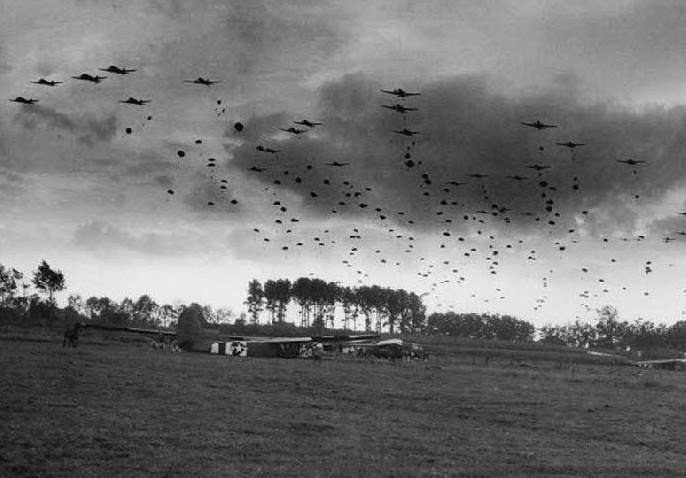 After losing much of their strength in the Falaise Pocket, and the German army in the west in full retreat. One significant barrier remained to Allied progress remained: the Siegfried Line, the defensive works on the German border. The primary goal of Market Garden was to bypass the Siegfried line altogether. By heading north instead of east, the Allies could cross the southern half of the Netherlands. They could then move into Germany beyond the northern end of the Siegfried Line, landing straight in the Ruhr Valley, Germany’s industrial heartland. 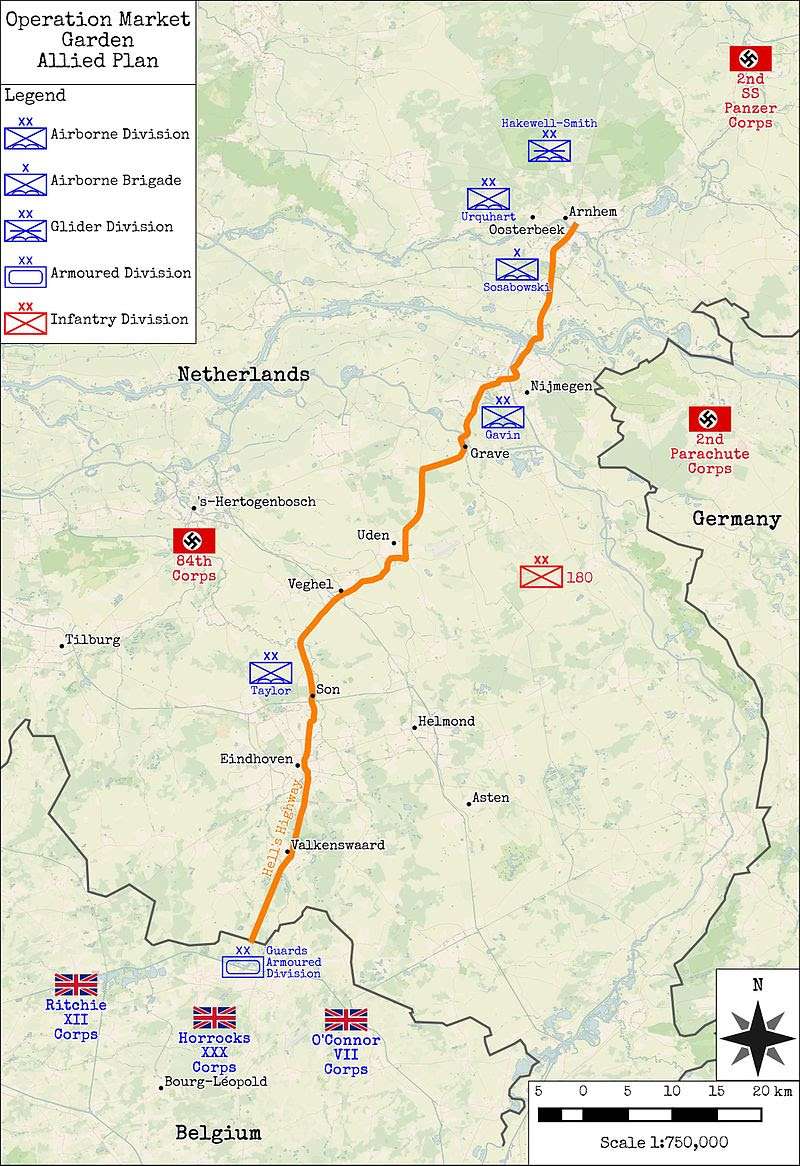 Rivers and canals running east to west crisscross the southern part of the Netherlands, and bridges across these natural barriers would give the Germans strong defensive points. Therefore, the bridges along the planned route had to be captured in advance. 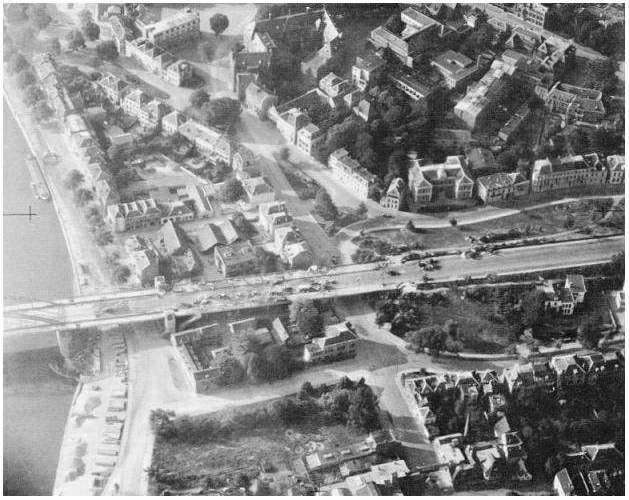 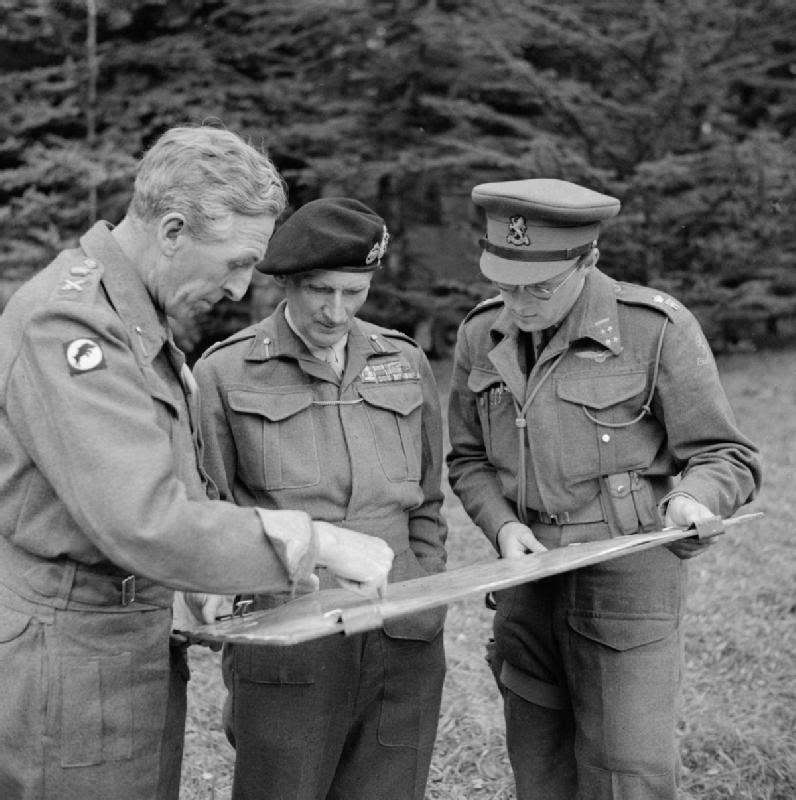 At 2:15 pm on September 17, a rolling artillery barrage and RAF rocket strikes along the highway announced the advance of XXX Corps. The first stop, Eindhoven, was 14 miles away and the corps was expected to get there in two to three hours. Thanks to German resistance, however, they only covered half the distance in that time. The troops quickly learned that the route, nicknamed Hell’s Highway, was a death trap. It was a narrow strip of high ground, surrounded on both sides by floodplains and polder, ground recovered from the sea. The tanks could not get off the highway, so they made easy targets for Germans attacking the column from the flanks. 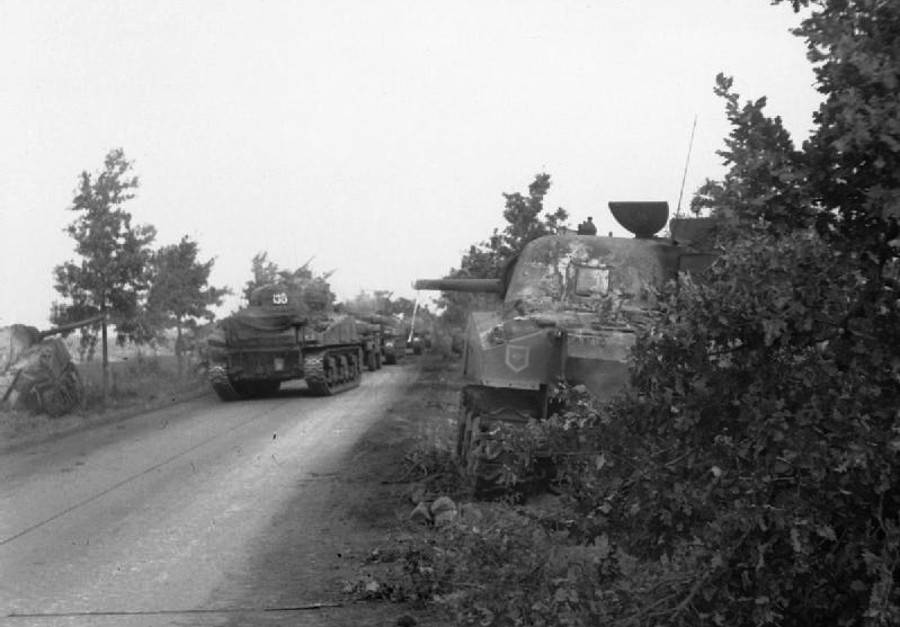 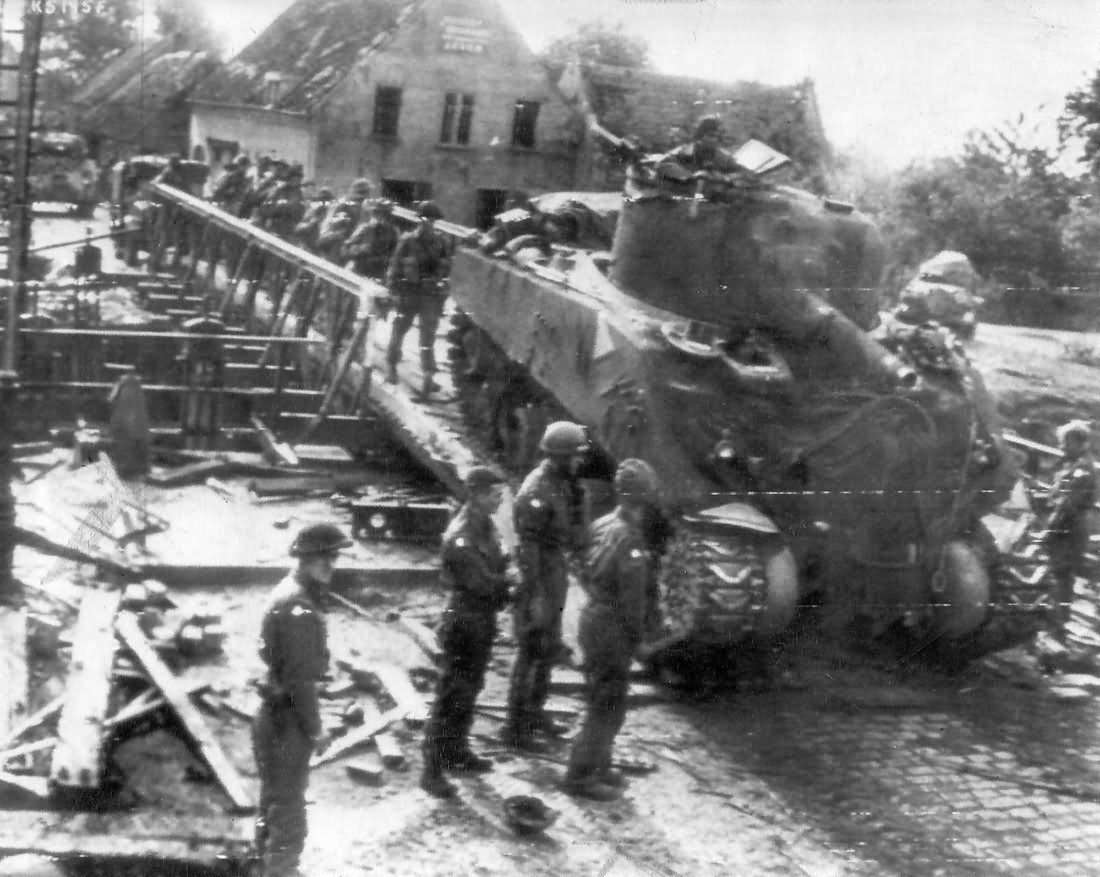 On the third day, XXX Corps made up for the previous delays but ran into trouble again. The Nijmegen area was attacked by the 82nd Airborne. Like the 101st, they also captured all but one of their bridges. Unfortunately, the last bridge was the most important one: the one at Nijmegen itself, across the Waal river. It was large and impossible to replace with a Bailey bridge if blown up. It was also the only way across. Luckily for the Allies, the Germans did not demolish it, as they were planning to use it in a later counterattack. Unfortunately, they held the north end of the bridge. The 82nd were all on the south side; the only thing they could try was a frontal attack across the bridge, but the attempt failed. 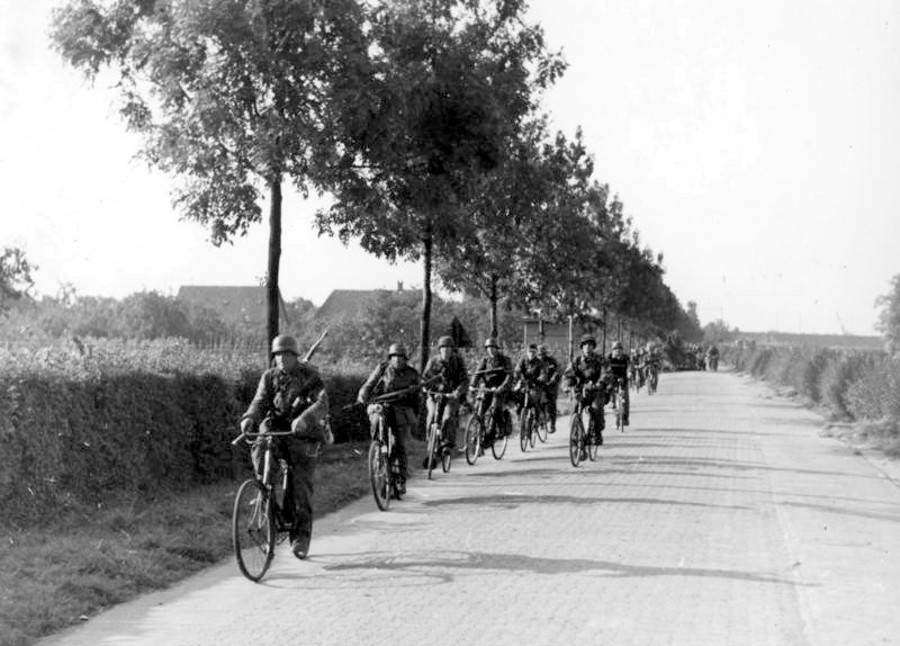 The 82nd tried to cross the river on the fourth day of the operation, using canvas bridge engineers’ boats, to outflank the Germans and take the northern bridgehead. They had no boating experience, many men had to paddle with their rifle butts, and they came under machine gun and artillery fire on the water. The men suffered heavy casualties, and all they could do once on the north side was to take shelter in a nearby village. When the vanguard of XXX Corps arrived in the evening, the first few tanks had to cross an unsecured bridge under enemy fire. By this time, the tanks were low on fuel and ammo, and officers had no idea of what German defenses lay further ahead, so the force stopped for the night. 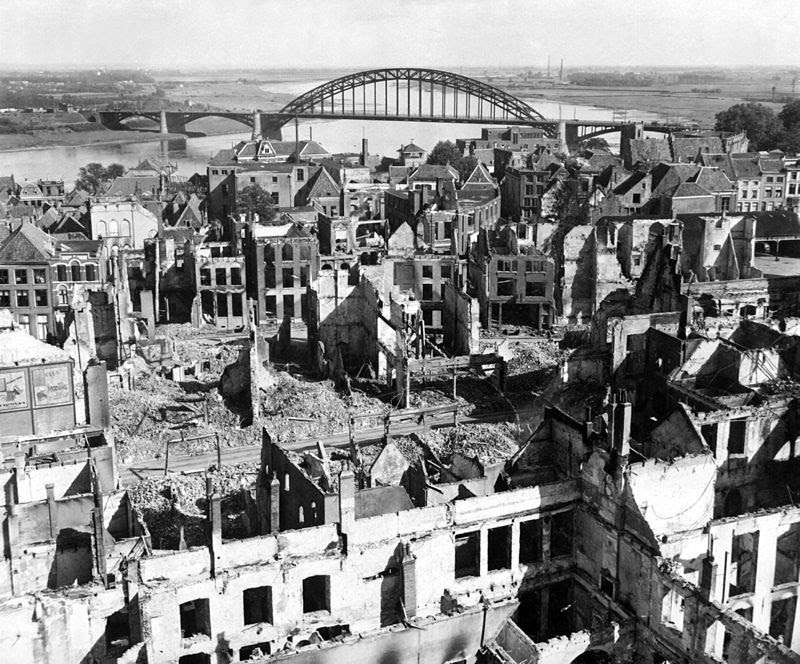 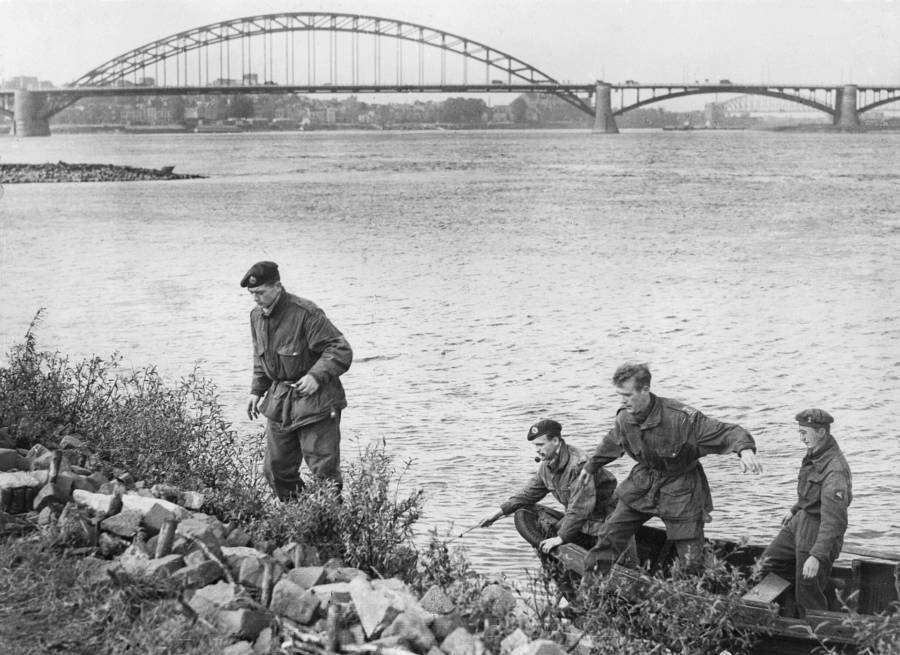 The fighting continued for several more days in an attempt to rescue as many of the surrounded British and Polish troops as possible, but the original goal of securing a route through the Netherlands failed. The war would not be over by Christmas.