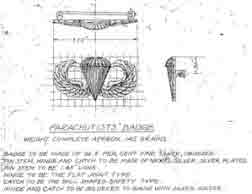 The first Parachute badge was designed during World War II by Captain (later Lieutenant General) William P. Yarborough of the 501st Parachute Battalion. A memorandum of record written by Captain Yarborough on April 22, 1941, tells the story of the birth of the parachute badge “On March 3, 1941, I was ordered to Washington to report to the Adjutant General for temporary duty in the Office of the Chief of Infantry. My mission was the procurement of a suitable parachutist badge which would meet with the approval both of the War Department and the Commanding Officer of the 501st Parachute Battalion. Major Miley (commander of the 501st), before my departure, gave me full authority to approve any design that I considered acceptable, and to do so in his name. The same authority was delegated to me in the name of the Chief of Infantry. “I drew the original sketch in the office of Lieutenant Colonel Beuchner, G-3; a finished copy of my original sketch was prepared in the office of the Quartermaster General (he came up with the eventual design after dozens of sketches). Through the help of Mr. A.E. Dubois, in the Quartermaster General’s office, 350 of the badges were procured from the Bailey, Banks & Biddle Company in Philadelphia and were in the hands of the Commanding Officer of the 501st Parachute Battalion by March 14, 1941. This is believed to have been an all time speed record for War Department Procurement.” “I personally took the correspondence relative to the badge’s approval from one office to another until the transaction was complete. This operation took me one entire week, eight hours a day.”

Captain Yarborough even applied for a patent to protect the design from unauthorized reproduction. On February 2, 1943, Patent #D134963 was granted for “A Parachutist’s Badge” for a period of three and one-half years. 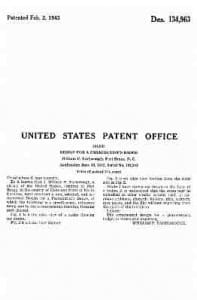 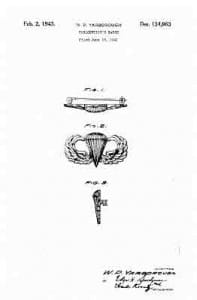