Clark Gable the biggest movie star in the world when he joined the Army. after his wife, Carole Lombard, was killed in a plane crash. 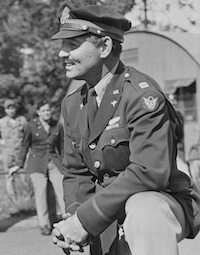 Clark Gable was the biggest movie star in the world when he joined the military. Devastated after his wife, actress Carole Lombard, was killed in a 1942 plane crash while she was raising money for War Bonds, he enlisted in the Army Air Force at the age of 41. He served as an observer-gunner in B-17 Flying Fortresses between May 4 and September 23, 1943, earning the Air Medal and the Distinguished Flying Cross for his efforts. He also narrated the AAF film Combat America.

There are no reviews yet.

Be the first to review “Clark Gable Dog Tags”