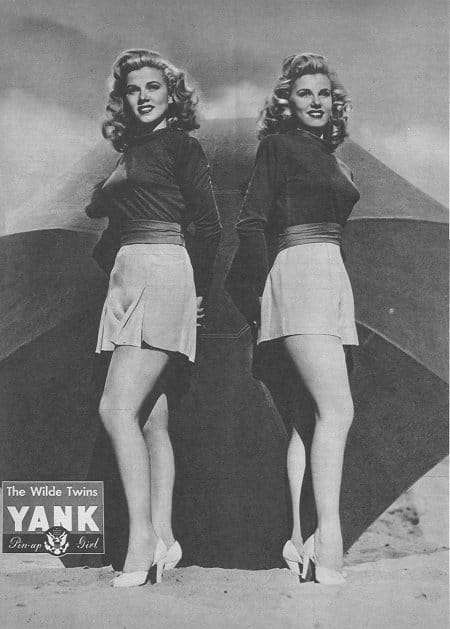 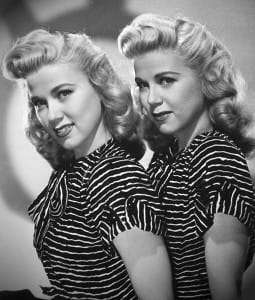 Lee and Lyn Wilde, sometimes billed as The Wilde Twins were twin sisters, who appeared in films of the early to mid 1940s.

Marion Lee and Mary Lyn Wilde were born in in East St. Louis, Illinois, Lee is the older of the two, born shortly before midnight of October 10, 1922, with Lyn born in the early hours of the following morning.

The began singing with their siblings in church, and by their teens were singing hymns for their local radio station, as well as performing in Illinois and Kentucky. By 1940 they were band singers, and in 1942 they made their film debuts, as vocalists for the Charlie Barnett Band, performing one song in the Harriet Hilliard film “Juke Box Jenny” (1942). Further live performances led to another featured film appearance in the Judy Garland film “Presenting Lily Mars” in 1942. Joe Pasternak was impressed by them and signed them to a seven year contract with Metro-Goldwyn-Mayer studios. They played small roles in “Andy Hardy’s Blonde Trouble” (1944), followed by “Twice Blessed” (1945), a film written specifically for them to introduce them to a wider audience. 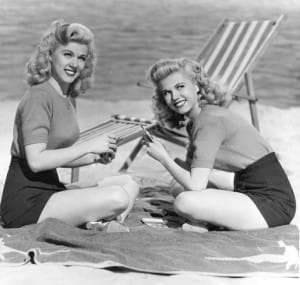 The sisters appeared in nine films together until 1949, and Lyn briefly continued her film career, and appeared in a further six films until 1953. They married brothers, Jim and Tom Cathcart, and focused their attentions on family life, rather than continuing in show business, but they retained a love of music. In 1989 they recorded a reunion album titled “Back to Together Once Again” and continued to perform occasionally into the 1990s.

Check out these Pin Ups: