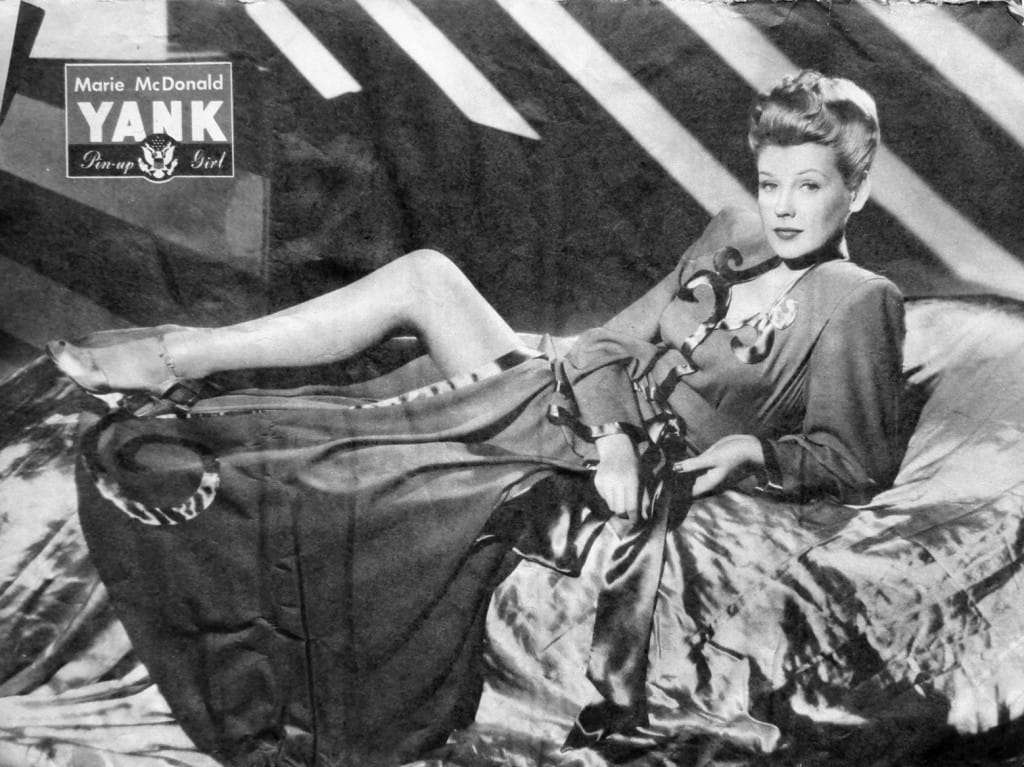 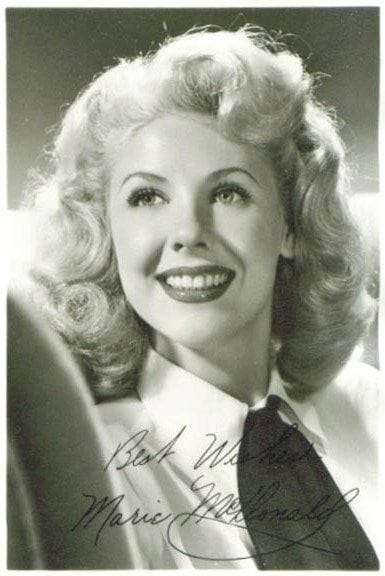 Marie McDonald, born Cora Marie Frye on July 6, 1923 in Burgin, Kentucky, was a leggy, voluptuous blonde starlet who pursued her career with a vengeance but found little reward in the end. Her mother was a former Ziegfeld girl and her grandmother an operatic singer. Her father, on theÂ other hand, was not so artistically inclined, earning a living as a warden at Leavenworth Prison. Her parents divorced when Marie was just 6 yearsÂ old. Â Marie’s mother remarried and the new family moved to Yonkers, New York, where she attended Roosevelt High School and excelled in piano andÂ wrote for the school newspaper.

Although Marie was offered a college scholarship by Columbia University in journalism, Marie’s impressive beauty and physical assets propelled herÂ to try a show business career. A Powers model at 15 (she lied about her age), she quit high school and started entering beauty contests, winningÂ the Miss Yonkers and The Queen of Coney Island titles, among others. In 1939 she was crowned Miss New York, but subsequently lost at the MissÂ America pageant. 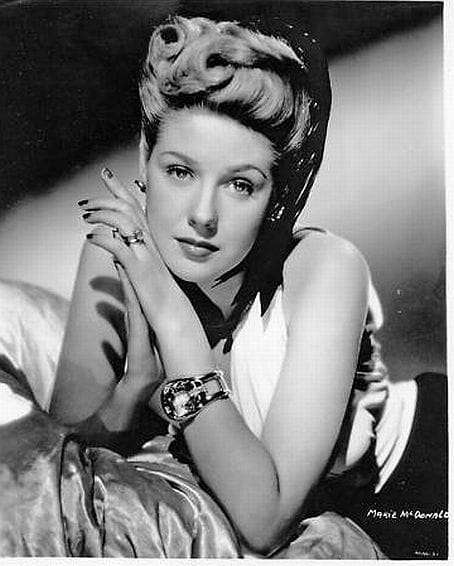 The attention she received from her beauty titles, however, pointed her straight to the Broadway stage and the George White’s Scandals of 1939.

This in turn led to her move to Los Angeles, finding work in the chorus line while trying to break into pictures. She found her first singing workÂ with Tommy Dorsey & His Orchestra on his radio show and eventually joined other bands as well. Although Universal signed her up, she couldn’t getÂ past a few one-line jobs. She knew publicity would have to be her mode of operation if she was to draw the necessary attention and advance herÂ career.

During World War II, McDonald became one of Hollywood’s most popular pin-up girls and she posed for the United States military magazine,Â YANK.

Press agents dubbed Marie The Body and the tag eventually stuck. Though her physical attributes were impressive, her talent was less so. ManagingÂ to come her way were the films Guest in the House (1944), Living in a Big Way (1947) with Gene Kelly and Tell It to the Judge (1949). Marie wasÂ once in contention for the Billie Dawn role in Born Yesterday, which could have been her big break, but she lost out to Judy Holliday. Â TheÂ audience simply didn’t latch on to Marie and she ended up more on the road doing bus-and-truck shows than anything else.

Despite a plethora of tabloid attention, which included her seven marriages and numerous sex scandals in addition to the publicity hijinks she

managed to muster up, notoriety that would have made the late Jayne Mansfield envious, Marie’s career eventually stalled and she turned to drink,Â drugs and despair. This led to frequent skirmishes with the law and more than a few nervous breakdowns. Her last effective role was in the JerryÂ Lewis starrer The Geisha Boy (1958) where she gamely played a snippy movie star at the mercy of the comedian’s outrageous slapstick. On OctoberÂ 21, 1965 (aged 42) at Calabasas, California, the never-say-die gal finally decided enough was enough and she ended it all with an overdose ofÂ Percodan. Â She was laid to rest in the Forest Lawn Memorial Park Cemetery in Glendale, California.

Three months after McDonald’s death, her sixth husband Donald F. Taylor, who was a producer had occasionally acted under the name Don Taylor,Â committed suicide in January 1966. McDonald’s three surviving children were raised by Harry Karl and his wife, Debbie Reynolds.