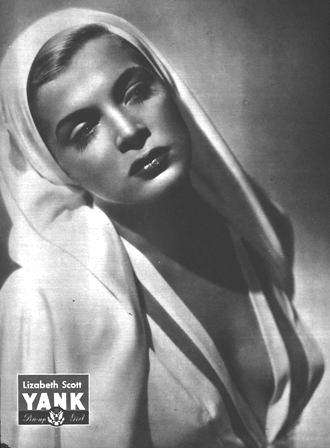 Lizabeth Scott was born Emma Matzo on September 29, 1922 in the Pine Brook section of Scranton, Pennsylvania, the daughter of John and Mary Matzo, Roman Catholic immigrants from Slovakia. She attended Central High School and Marywood College.

She later went to New York City and attended the Alvienne School of Drama. In late 1942, she was eking out a precarious living with a small Midtown Manhattan summer stock company when she got a job as understudy for Tallulah Bankhead in Thornton Wilder’s play “The Skin of Our Teeth”. However, Scott never had an opportunity to substitute for Bankhead.

When Miriam Hopkins was signed to replace Bankhead, Scott quit and returned to her drama studies and some fashion modeling. She then received a call that Gladys George, who was signed to replace Hopkins, was ill, and Scott was needed back at the theatre. She went on in the leading role of “Sabina”, receiving a nod of approval from critics at the tender age of 20. The following night, George was out again and Scott went on in her place.

Soon afterward, Scott was at the Stork Club when film producer Hal Wallis asked who she was, unaware that an aide had already arranged an interview with her for the following day. When Scott returned home, however, she found a telegram offering her the lead for the Boston run of “The Skin of Our Teeth”. She could not turn it down. She sent Wallis her apologies and went on the road.

Though the Broadway production, in which she was credited as “Girl”, christened her “Elizabeth”, she dropped the “e” the day after the opening night in Boston, “just to be different”. 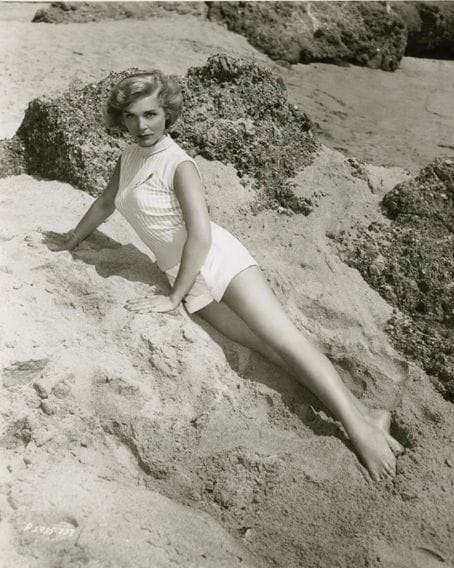 A photograph of Scott in Harper’s Bazaar magazine was seen by movie agent Charles Feldman. He admired the fashion pose and took her on as a client. Scott made her first screen test at Warner Brothers, where she and Wallis finally met. Though the test was bad, the producer recognized her potential. As soon as Wallis set up shop at Paramount, she was signed to a contract. Her movie debut was in “You Came Along” (1945) opposite Robert Cummings.

Paramount publicity dubbed Scott “The Threat,” in order to create an onscreen persona for her similar to Lauren Bacall or Veronica Lake. Scott’s smoky sensuality and husky voice lent itself to the film noir genre and, beginning with “The Strange Love of Martha Ivers” (1946) starring Barbara Stanwyck and Van Heflin, the studio cast her in a series of noir thrillers. Film historian Eddie Muller has noted that no other actress has appeared in so many noir movies, with more than three quarters of her 20 films qualifying.

The dark blonde actress was initially compared to Bacall because of a slight resemblance and a similar voice, even more so after she starred with Bacall’s husband, Humphrey Bogart, in the 1947 noir thriller “Dead Reckoning”. At the age of 25, Scott’s billing and portrait were equal to Bogart’s on the film’s lobby posters and in advertisements. The movie was the first of many femme fatale roles for Scott. 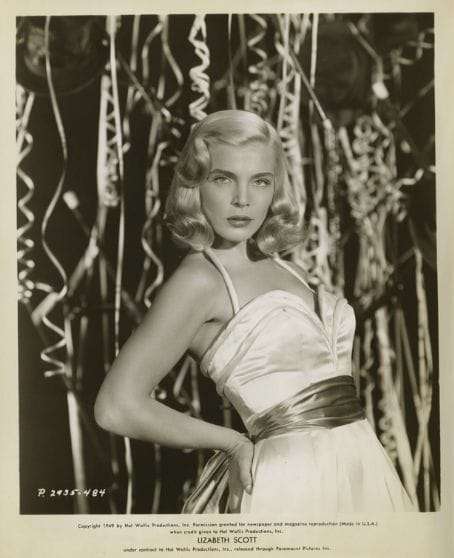 She also starred in “Desert Fury” (1947), a noir filmed in Technicolor, with John Hodiak, Burt Lancaster, Wendell Corey and Mary Astor. In it, she played Paula Haller, who, on her return from college, falls for gangster Eddie Bendix (Hodiak), and faces a great deal of opposition from the others. Scott was paired with Lancaster, Corey and Kirk Douglas in Wallis’ “I Walk Alone” (1948), a noirish story of betrayal and vengeance. In 1949, she starred as a vicious femme fatale in “Too Late for Tears”. The film is unusual for featuring her as the main character, rather than the supporting role most women were relegated to in film noirs of the period.

Having being known professionally as Lizabeth Scott for 4Â½ years, she appeared at the courthouse in Los Angeles, on October 20, 1949 and had her name legally changed. Another courtroom appearance came several years later, in 1955, when she sued Confidential magazine for stating that she spent her off-work hours with “Hollywood’s weird society of baritone babes” (a euphemism for a lesbian) in an article which claimed Scott’s name was found on the clients’ list belonging to a call-girl agency. The suit was thrown out on a technicality.

After completing “Loving You” (1957), Elvis Presley’s second movie, Scott retired from the screen. Later that year, she would record her album, “Lizabeth”. The next few years saw Scott occasionally guest-star on television, including a 1963 episode of “Burke’s Law”. 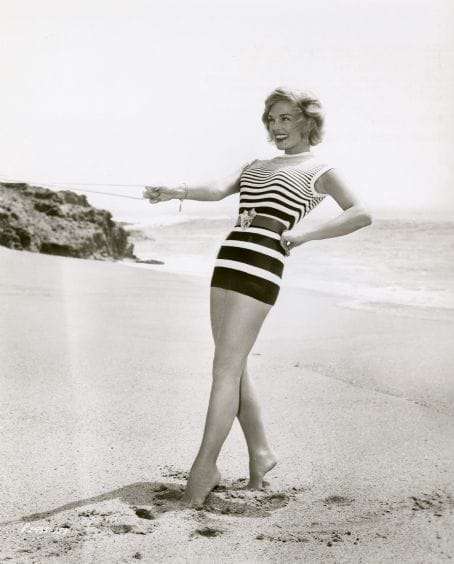 After completing her final major film role, Scott signed a recording contract with Vik (a subsidiary of RCA) and recorded an album with Henri Rene and his orchestra (in Hollywood on October 28, 29 and 30, 1957). Simply titled Lizabeth, the tracks are a mixture of torch songs and playful romantic ballads. The recordings were arranged by George Wyle and Henri Rene, while Herman Diaz, Jr. produced and directed. The album is currently available on CD and online via iTunes.

Despite some rumored romances, no positive records of a relationship exist, and Scott never married or produced any children. At least one book suggests she was a mistress of married film producer Hal Wallis.

While she would continue to make some guest appearances on various television shows throughout the 1960s, much of her private time was dedicated to classes at the University of Southern California. In 1972, she made one final motion picture appearance, in “Pulp” with Michael Caine and Mickey Rooney. After that, she mostly kept away from public view and has declined many interview requests.

Lizabeth Scott did, however, appear on stage at an American Film Institute tribute to Hal Wallis in 1987. In 2001, she was listed as one of the celebrity guests for the Michael Jackson: 30th Anniversary Special, which screened in the USA on CBS. More recently, she was photographed next to an image of herself on the poster for “The Strange Love of Martha Ivers” at the AMPAS Centennial Celebration for Barbara Stanwyck on 16 May 2007.

In 2003, Lizabeth Scott spoke substantially to Bernard F. Dick about her time in movies for his biography of producer Hal Wallis. In the book, the author remarks that during his conversation with Scott in a restaurant, Scott (then 81 years old) was able to recite her opening monologue from “The Skin of Our Teeth”, which she performed on stage at age 20. The book, Hal Wallis: Producer to the Stars, includes the most comprehensive account of Scott’s career available.

Lizabeth Scott has a star on the Hollywood Walk of Fame for her contribution to motion pictures at 1624 Vine Street in Hollywood.