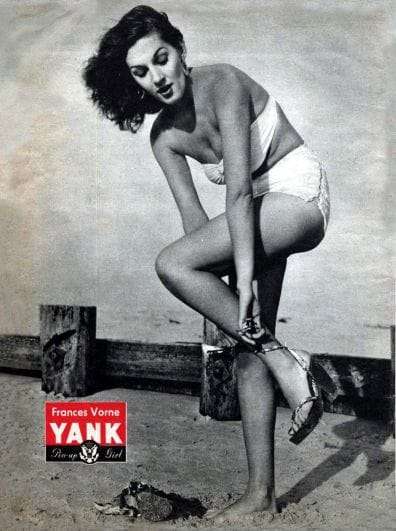 Frances Vorne, a 19-year-old New York girl who calls herself “The Shape”, wound up 1944 with perhaps the best claim to an honor publicity agents fight desperately over: the crown as Pin-Up Girl of the Year. First the Associated Press in a rare moment of relaxation gave her the title.

The Shape had received even more dazzling recognition as the circle of her admirers expanded to include at least one segment of British officialdom. The British Ministry of Information saw her photograph in the London Daily Mirror, immediately cabled the U.S. for permission to use it in stimulating the morale of Britain’s Army & Navy.

The Highlight of her career seems to be “Pin-Up Girl of the Year 1945” chosen by the Associated Press. He only film work seems to be a “Movie NewsReels Swimsuit Revue” which also featured Maria Montez and other beautiful young popular girls. Movie NewsReels were shown along with feature films and cartoons at theaters this one was also sold in 8 or 16mm via mail-order advertising from the back of Popular Science and other magazines. Frances Vorne was marketed as the “Modern Venus” and Star of “Swim Suit Revue”. Here last known work is the POLICE GAZETTE MAGAZINE cover June, 1947.