Frances Langford was born Julia Frances Newbern Langford on Saturday, April 04, 1914 in Lakeland, Florida, she was the daughter of Vasco Cleveland Langford and his wife, Anna Rhea Newbern. She was an American singer and entertainer who was popular during the Golden Age of Radio and also made film appearances over two decades.

Langford originally trained as an opera singer. While a young girl she required surgery on her throat, and as a result, she was forced to change her vocal style to a more contemporary big band, popular music style. While singing for radio during the early 1930s, she was heard by Rudy Vallee, who invited her to become a regular on his radio show. From 1935 until 1938 she was a regular performer on Dick Powell’s radio show. From 1946 to 1951, she performed with Don Ameche on The Bickersons.

With her film debut in “Every Night at Eight” (1935) she introduced what became her signature song: “I’m in the Mood for Love.” She then began appearing frequently in films such as “Broadway Melody of 1936” (1935), “Born to Dance” (1936) and “Yankee Doodle Dandy” (1942) with James Cagney, in which she performed the popular song “Over There.” In several of these films, such as Broadway Melody, she appeared as herself, as she did in 1953 in “The Glenn Miller Story” where she sang “Chattanooga Choo Choo” with the Modernaires and the movie orchestra. 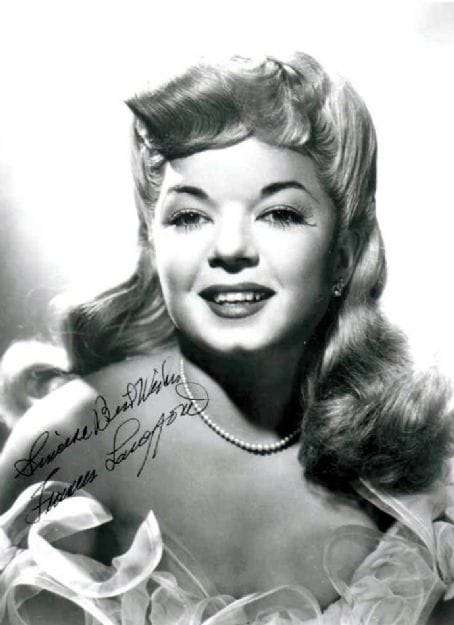 From 1941, Langford was a regular singer on Bob Hope’s radio show. During World War II, she joined Hope, Jerry Colonna, and other performers on U.S.O. tours through Europe, North Africa, and the South Pacific, entertaining thousands of G.I.’s throughout the world.

In his memoir, “Don’t Shoot! It’s Only Me!”, Bob Hope recalled how Frances Langford got the biggest laugh he had ever heard. At a U.S.O. show in the South Pacific, Langford stood up on a stage to sing before a huge crowd of G.I.’s. When Langford sang the first line of her signature song, “I’m in the Mood for Love,” a soldier in the audience stood up and shouted, “You’ve come to the right place, honey!”

During her travels with Hope, Langford often experienced the hazards of war first hand, taking shelter during bombing raids and dodging aerial attacks. During one of their USO tours, she and Bob Hope were forced to leap out of a jeep to avoid fire from a German fighter plane. They both jumped to safety in a culvert, with Frances landing on top of Bob. Another time they spent the night in the basement of a hotel in Algiers as bombs burst above them. She also survived the crash of the show’s airplane in Australia. Langford once caused an uproar when she violated military rules by hitching a ride in a P-38 fighter plane. The matter was made worse when the plane went into action during its flight. 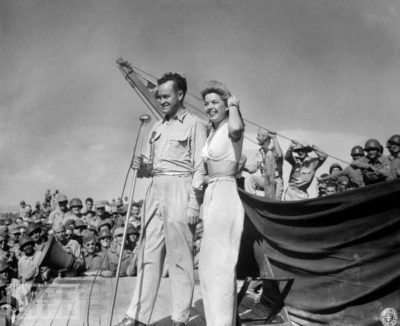 Also, during the war, Langford wrote a weekly column for Hearst Newspapers, entitled “Purple Heart Diary,” in which she described her visits to military hospitals to entertain wounded G.I.’s. She used the weekly column as a means of allowing the recovering troops to voice their complaints, and to ask for public support for making sure that the wounded troops received all the supplies and comforts they needed. During the war while on a stint in Italy, Francis danced with George Belt, a serviceman from Ozark, Arkansas. He still brags about it today.

In 1953, Frances again entertained troops with the USO, this time in Korea.

She gave her last public concert in 1966 during a tour for the US forces in Vietnam.

Her association with Hope continued into the 1980s. In 1989 she joined him for a USO tour to entertain troops in the Persian Gulf.

Frances Langford married three times. Her first husband, from 1934 until 1955, was actor Jon Hall. In 1948 they donated 20 acres of land near her estate in Jensen Beach, Florida to the Board of County Commissioners of Martin County, which named it Langford Hall Park. Located at 2369 N.E. Dixie Highway just south of the Stuart Welcome Arch, it is known today simply as Langford Park and is one of the county’s major parks.

In 1955, she married Outboard Marine Corporation President Ralph Evinrude. They lived on her estate in Jensen Beach and opened a resort they named The Outrigger, where Langford frequently performed. Evinrude died in 1986. In 1994, she married Harold Stuart, who had been an assistant secretary of the United States Air Force under President Harry S. Truman and who survived her. She had no children.

Langford was a supportive member of the Jensen Beach community and constantly donated money to the community. She died at her Jensen Beach, Florida home on July 11, 2005, at age 92 from congestive heart failure. In 2006, the Frances Langford Heart Center, made possible by a bequest from her estate, opened at Martin Memorial Hospital in Stuart, Florida.

Nickname: Sweetheart of the Fighting Fronts

“Entertaining the troops was the greatest thing in my life. We were there just to do our job, to help make them laugh and be happy if they could.” (January 2002)

“I’d sing a song, and I could just see the guys getting this faraway expression. I knew they were going home in their minds.”