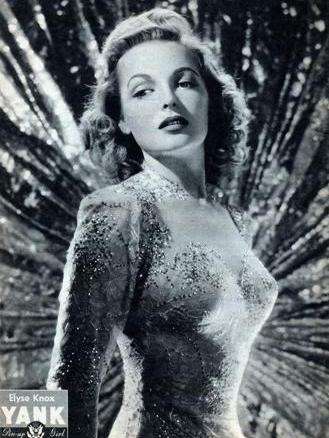 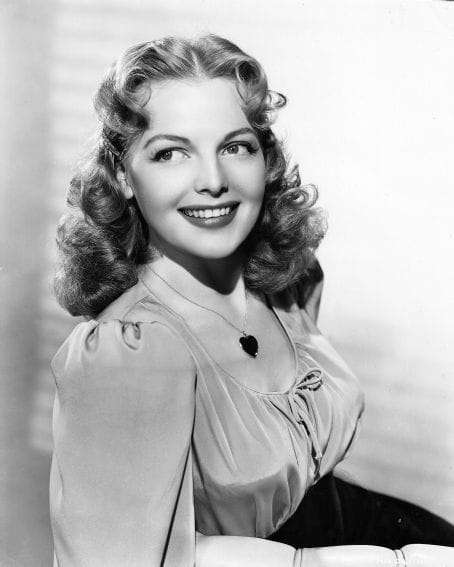 Elyse Knox was born Elsie Lillian Kornbrath to Frederick and Elizabeth Kornbrath on December 14, 1917 in Hartford, Connecticut, she is not the daughter of U.S. Secretary of the Navy Frank Knox, despite many modern sources suggesting she is. She studied at the Traphagen School of Fashion in Manhattan then embarked on a career in fashion design. Her good looks enabled her to model some of her own creations for Vogue magazine that led to a contract offer from Twentieth Century Fox film studio in 1937.

Knox performed mainly in minor or secondary roles until 1942 when she had a leading role with Lon Chaney, Jr. in “The Mummy’s Tomb”, one of the series of Mummy horror films made by Universal Studios. Knox appeared as herself in the Universal Studios 1944 production “Follow the Boys,” one of the World War II morale-booster films made for both the soldiers serving overseas as well as civilians at home. Knox also was a pin up girl during the War, appearing in such magazines as YANK, a weekly put out by the United States Military.

In late 1945, she was signed by Monogram Pictures to portray Anne Howe, the love interest of fictional boxer Joe Palooka in “Joe Palooka, Champ”. Based on the very popular comic strip, the instant success of the May 1946 film led to Elyse Knox appearing in another five Joe Palooka productions. After acting in thirty-nine films, Elyse Knox retired in 1949 following her performance in the musical film “There’s a Girl in My Heart”.

Knox continued to do modeling work for print ads and while appearing on the Bing Crosby radio show she met football star Tom Harmon. They became engaged, but broke up when Harmon entered the U.S. Army Air Corps in 1942. That year, Knox married fashion photographer Paul Hesse, who had shot many of her print ads and magazine covers. The marriage was brief. Following her divorce and Tom Harmon’s return from World War II (during which he survived two plane crashes and being lost in the jungle), she and Harmon married in 1944. Knox’s wedding dress was made from silk from the parachute Harmon used when bailing out of his crippled plane. The couple remained together until his death in 1990. They had three children, Kristin (b.1945), an actress and painter who at seventeen married recording artist Ricky Nelson and had Tracy, twins Gunnar and Matthew, and son Sam; Kelly (b. 1948), who modeled and also acted in film and television (TJ Hooker) and was once married to automaker John DeLorean; and Mark (b.1951), film and television actor who starred in films such as “The Presidio” and the current TV show “NCIS”.

She it the Mother-in-law of actress Pam Dawber.

Besides being married to a football star, Tom Harmon, her brother, Ron Knox, played quarterback for the Chicago Bears, and her son, Mark Harmon, was a star quarterback at UCLA.