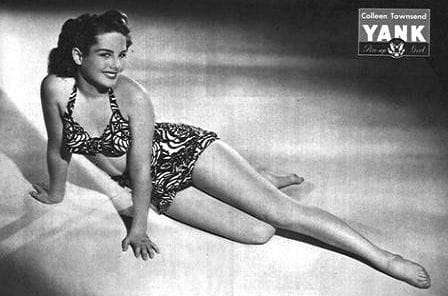 *Shapely brunette Colleen Townsend was born on December 21, 1928 in the Los Angeles area and started her brief career as a Twentieth Century Fox starlet in 1947 at the age of eighteen. A Mormon at the time by choice, she had completed a year and a half at Brigham Young University in Utah when discovered by Hollywood scouts. For years she appeared unbilled in sentimental comedy before finally earning a featured role in the drama “The Walls of Jericho” (1948). By 1946, she was appearing on the cover of magazines. She was the subject of a cover story for Life in 1948, which discussed the way in which major studios groomed and manufactured their stars, using Townsend’s story as an example. The studio created a photographic calendar for her, to “put [her] face in every home, office and barracks in America all year around.” Hedda Hopper was also quoted as saying that Townsend was “going places.” She then appeared in two other pictures, the modest homespun comedy “Chicken Every Sunday” (1949) as the daughter of Dan Dailey and Celeste Holm, and, her better known, the war comedy “When Willie Comes Marching Home” (1950) with Dailey again and Corinne Calvet, before calling it quits.

In 1950, Colleen abruptly changed the course of her life by devoting herself to religion. She abandoned Hollywood and began speaking at churches and Youth for Christ evangelistic events. She attended the San Francisco Theological Seminary and in 1950 married one of her fellow seminarians, Louis H. Evans, Jr. It is assumed she renounced Mormonism as her husband became pastor of First Presbyterian Church in Hollywood. In 1954, Colleen (Townsend) Evans returned to acting but in roles produced by the Billy Graham Evangelistic Association — “Oiltown, U.S.A.” (1954) and “Souls in Conflict” (1955).

Colleen has served as a pastor’s wife at churches from Southern California to Washington D.C. A strong advocate for human rights, she has consulted with the House Foreign Affairs Subcommittee on Human Rights issues and has served on the boards of several ministries, including the Christian College Coalition and World Vision and International Justice Mission. She has served as the first female chair of a Billy Graham Crusade and continues to travel the country as a speaker and author of inspirational books, including “A New Joy” (1973) and “A Deeper Joy” (1982). She co-wrote “My Lover, My Friend” (1976) with husband Louis.

Check out these other Pin Ups: