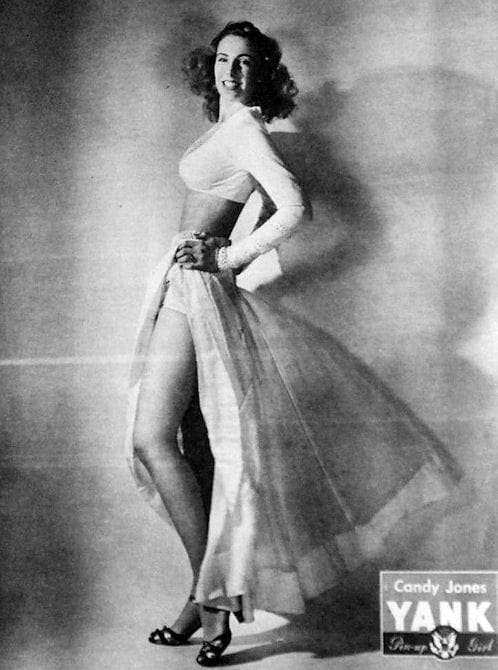 Candy Jones, originally known as Jessica Arline Wilcox, was born on December 31, 1925 in Wilkes-Barre, Pennsylvania. She was raised and educated in Atlantic City, New Jersey.

Candy Jones was born to a well-off family. Jones reported vivid, conscious memories of physical abuse by her parents, and that she had vague memories of sexual abuse in her youth. She was shuttled between relatives, and her mother, Jones insisted, often kept her cloistered or locked in dark rooms. As a child, Jones said she had an imaginary friend named Arlene to help through her lonely episodes.

She grew into an attractive, statuesque young woman who was very tall, about 6 ft 4 in. Changing her name, she pursued a career as a fashion model. She was a quick success, becoming a runner up for Miss New Jersey in the Miss America contest. Jones was able to parlay this into a hostess job at the main Miss America contest, and a successful career. She was one of the leading pin-up girls of the World War II era: in one month in 1943, she appeared on 11 different magazine covers.

During a lengthy United Service Organizations (USO) tour in the Philippines, Jones fell ill in 1945, and was treated by a doctor who was still alive when Candy publicized her mind-control claims; Donald Bain gave this doctor the pseudonym “Gilbert Jensen”. According to researcher Martin Cannon, who interviewed Jones before she died in 1990, the “Marshall Burger” pseudonym in Bain’s book who worked with Jensen on the Jones case was actually Dr. William Kroger.

In the 1940s and 1950s she was a leading model and pin-up girl, and afterwards established a modeling school and wrote several books on modeling and fashion.

In 1946, Jones married fashion czar Harry Conover, one of the first model agents. They had three sons, and Jones says she didn’t realize Conover was bisexual until some years into their marriage. She recognized some people might consider this naive, but Jones insisted her abusive childhood had made her wary of intimate relationships, and though she had many suitors, she was rather sexually inexperienced when she married. She reported that Conover initiated sexual activities with her very few times, and only when he was intoxicated.

Without notice, Conover disappeared in late 1958. Jones notified police, and Conover’s absence made the news. When he returned after a long binge, Jones sued for divorce in 1959. After the divorce, she was left with $36, and considerable debts.

Controversially, Jones claimed to be a victim of the CIA mind-control program, Project MKULTRA, in the 1960s.

Shortly after their marriage, Nebel said, he noted that Jones exhibited violent mood swings, and, at times, seemed to display a different personality. Nebel called this “The Voice … a look, a few moments of bitchiness.” The Voice usually vanished rather quickly, but the change was so drastic from Jones’s usually pleasant demeanor that Nebel was startled and distressed.

Colin Bennett writes, “A few weeks after their marriage, [Jones] did tell Nebel that she had worked for the FBI for some time, adding mysteriously that she might have to go out of town on occasion without giving a reason. This left Nebel wondering whether there was a connection between the ‘other’ personality within Candy and the strange trips she said she made for the FBI.”

Nebel began hypnotizing Jones, and uncovered an alternate personality named “Arlene”. Under hypnosis, Jones related a lengthy, elaborate account of her being trained in a CIA mind-control program, often at west coast colleges and universities. Jones and Nebel eventually recorded hundreds of hours of these hypnotic sessions.

Jones said she had some conscious memories of her involvement in the mind-control program: it began in 1960, she said, when an old USO acquaintance (an unnamed retired army general) asked to use Jones’ modeling school as a mailing address to receive some letters and packages. Jones agreed, she said, out of a sense of patriotism.

Eventually, said Jones, she was asked to deliver a letter to Oakland, California on a business trip she had scheduled. Again, Jones reported she agreed, and was surprised to discover the letter was delivered to the same Dr. Jensen who had treated her in the Philippines nearly two decades earlier. Jones said that Jensen and his associate, Dr. “Marshall Burger” (another pseudonym) offered hefty amounts of cash if she was willing to engage in further plans; in their earlier meetings, Jensen had noted that Jones was an ideal subject for hypnosis. Jones agreed, she said, because her modeling school was faltering, and she wanted to keep her sons in their costly private schools.

During hypnosis sessions, an alternate personality called “Arlene” was reportedly groomed by Jensen, so that Jones would have no memory of Arlene’s activities. Jones allegedly made trips to locations as far away as Taiwan. While hypnotized, Jones claimed that Jensen, Burger and others subjected her to painful tortures in order to test the effectiveness of the alternate personality. Donald Bain writes, “[Jones] would be a messenger for the agency in conjunction with her normal business trips.” This type of “super spy” who would have no memory of her activities was perhaps first suggested by Dr. George Estabrooks in his classic 1943 book, Hypnotism.

Again with the USO, Jones visited South Vietnam in 1970; she later suspected her visit had some connection to a disastrous attempt to free American prisoners of war from North Vietnam.

Jones’s and Nebel’s claims were first made public in 1974 (in Donald Bain’s The Control of Candy Jones). Nebel apparently accepted his wife’s claims, and openly discussed killing Dr. Jensen in revenge. However, Nebel was a prankster and a hoaxer of long standing and as he was not above hoaxing his radio audience, some doubted the recovered memories of Candy Jones’s past were genuine; later skeptics would argue that an alleged false memory syndrome was a more plausible explanation.

Several years later, Jones’ story gained more notice after the public disclosure of MK-ULTRA in 1977, and Bain’s book was republished by Playboy Press.

Bain reported that associates in Jones’ modeling schools asserted that Jones indeed had some puzzling absences – supposed business trips where little or no business seemed to be conducted. Bain also writes that another piece of evidence came forth when “Candy inadvertently held onto a passport of ‘Arlene Grant’: Candy in a dark wig and dark makeup.” Jones says she had no memory of dressing up in such an outfit, or of posing for a passport in a different name.

Bain also claimed that a tape recorded answering machine message was left on Jones and Nebel’s home telephone number on July 3, 1973: “This is Japan Airlines calling on oh-three July at 4.10 p.m. … Please have Miss Grant call 759-9100 … she is holding a reservation on Japan Airlines Flight 5, for the sixth of July, Kennedy to Tokyo, with an option on to Taipei. This is per Cynthia that we are calling.” When Jones telephoned the number and asked for Cynthia, she was told that no one of that name worked at the reservations desk. Bain speculates that “Cynthia” might have been “Arlene’s” CIA contact, or perhaps a “code word” meant to trigger a hypnotic suggestion.

Additionally, Brian Haughton notes that “There was also a letter [Jones] wrote to her attorney, William Williams, to cover herself in case she died or disappeared suddenly or under unusual circumstances; she told him she was not at liberty to reveal exactly what she was involved in. Bain wrote to Williams who corroborated this fact.”

It is also worth noting that in 1971, an article by Estabrooks was published in Science Digest, wherein he openly discussed the successful creation of amnesiac couriers of the type Jones claimed to have been.

Dr. Herbert Spiegel, a nationally-recognized hypnosis expert, wrote a foreword to the Playboy Press edition of The Control of Candy Jones. Spiegel opined that though Nebel was an amateur hypnotist, he had in fact hypnotized Jones well, and had seemed to avoid planting ideas or leading Jones’ recollection. Spiegel was not convinced that the entire story was accurate, but he thought that the corroborate evidence Jones, Bain and Nebel had uncovered made it difficult to dismiss the account outright.

A few years after Bain’s book was published, in 1978, Long John Nebel died of cancer. In July 1980 there was a gas explosion in Candy’s apartment building in New York, in which several residents were injured, Candy among them. She suffered a broken neck and sued the landlord for $20 million and Consolidated Edison for $80 million in punitive damages. On 18th January, 1990, Candy Jones died of cancer, aged 64, at Lenox Hill Hospital in New York.

Candy Jones is the subject of the Exit Clov song, “MK ULTRA.”

Check out these other WWII Pin Up Girls: