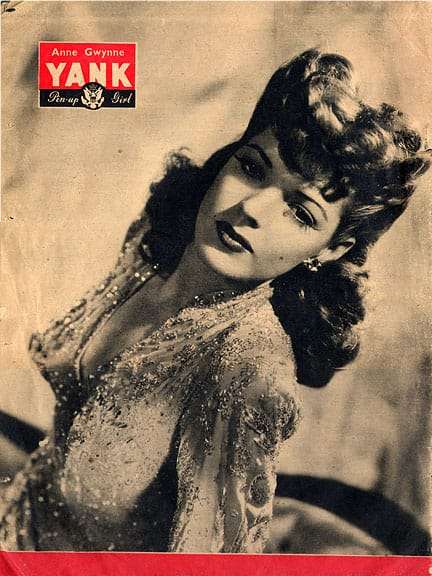 Vivid, strikingly beautiful actress Anne Gwynne arrived in Hollywood a typical starry-eyed model looking to become a big film star, and ended up one of Universal Studio’s favorite screamers in “B” horror films. Born Marguerite Gwynne Trice in Waco, Texas on December 10, 1918, but raised in Missouri, she first modeled Catalina swimwear and appeared in local community theater productions to gain experience. Universal Studios took one look at this gorgeous eyeful and immediately signed her up in 1939. Her first work was in westerns opposite the likes of Johnny Mack Brown, but she swiftly moved to chillers and at the mercy of Boris Karloff, Bela Lugosi, and Lon Chaney Jr.. Though she seldom rose above the second-string ranks, she was quite popular with the servicemen as a WWII pin-up.

Gwynne was a welcome presence in Universal’s “B” product, appearing in many of the studio’s horror films (The Black Cat, The Strange Case of Dr. Rx, Weird Woman, House of Frankenstein et. al.). She also played the villainous Sonja in the 1940 serial “Flash Gordon Conquers the Universe” and appeared with Abbott and Costello in “Ride ‘Em Cowboy” (1941). Free-lancing after Universal cut her loose in 1945, Gwynne played Tess Trueheart in RKO’s “Dick Tracy Meets Gruesome” (1947). She left films briefly in the mid-1950s, making an undistinguished comeback in “Teenage Monster” (1958), as the mother of the title character. 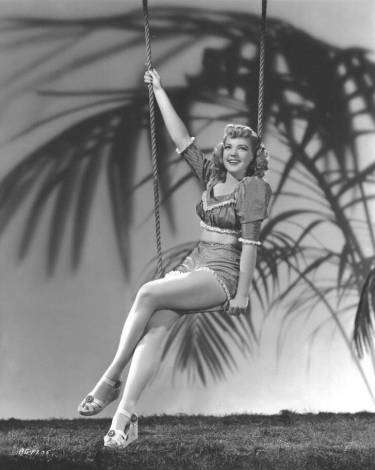 Anne Gwynne was a television pioneer, appearing in TV’s first filmed series, “Public Prosecutor” (1947-48), 26 mysteries each 17Â½ minutes in running time. When aired, the DuMont Television Network stopped the film before the climax and a live three-member panel would try to guess the identity of the culprit. Other TV stations could buy rights to air this series but usually did not use panelists. As many others before her, TV proved a welcome medium in the 50s as her film career fell away, appearing in guest spots and commercials.

Widowed in 1965, her health began to deteriorate in the 90s and she was forced to move to the Motion Picture Country Home. Anne Gwynne had the looks and talent to be a top star, but not the luck. Nevertheless, she was a game player who screamed with the best of them. She passed away on March 31, 2003 at age 84 in Woodland Hills, California following complications of a stroke following surgery at the Motion Picture Country Hospital. 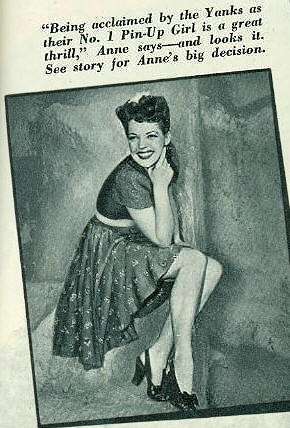 Was one of the top five pin-ups in World War II, according to a February 15, 1943 “Life” magazine article. Others were Dorothy Lamour, Ann Sheridan , Maureen O’Hara and Alexis Smith.

#1 pinup girl for 2 years in the “YANK” magazine for WWII servicemen.