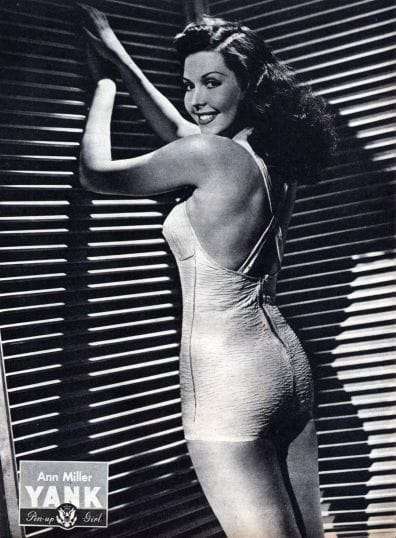 Ann Miller was born Johnnie Lucille Ann Collier on April 12, 1923 in Chireno, Texas, the daughter of Clara Emma (Birdwell) and John Alfred Collier, a criminal lawyer who represented the Barrow Gang, Machine Gun Kelly, and Baby Face Nelson, among others. Miller’s maternal grandmother was Cherokee. Miller’s father insisted on the name Johnnie because he had wanted a boy, but she was often called Annie. She took up dancing to exercise her legs to help her rickets. She was considered a child dance prodigy.

At the age of 13 Ann had been hired as a dancer in the Black Cat Club in San Francisco (she had told them she was 18). It was there she was discovered by Lucille Ball and talent scoutcomic Benny Rubin. And in 1937, RKO asked her to sign on as a contract player, but only if she could prove she was 18. Though she was really barely 14, she managed to get hold of a fake birth certificate, and so was signed on, playing dancers and ingÃ©nues in such films as Stage Door (1937), You Can’t Take It with You (1938), Room Service (1938) and Too Many Girls (1940). In 1939 she appeared on Broadway in George White’s Scandals and was a smash, staying on for two years. Eventually RKO released her from her contract, but Columbia Pictures snapped her up to appear in such WW II morale boosters as True to the Army (1942) and Reveille with Beverly (1943). When she decided to get married, Columbia released her from her contract. The marriage was sadly unhappy and she was divorced in two years. This time MGM picked her up, showcasing her in such films as Easter Parade (1948), On the Town (1949), and Kiss Me Kate (1953). In the mid-’50s she asked to leave to marry again, and her request was granted. This marriage didn’t last long, either, nor did a third.

Ann Miller invented pantyhose in the 1940s as a solution to the problem of continual torn stockings during the filming of dance production numbers. The common practice had been to sew hosiery to briefs worn by Miller. If torn, the entire garment had to be removed and resewn with a new pair. At Ann’s request, hosiery was manufactured for her as a single pantyhose.

Ann was famed for her speed in tap dancing. Studio publicists concocted press releases claiming she could tap 500 times per minute, but in truth, the sound of ultra-fast 500 taps was looped in later. Because the stage floors were slick and slippery, she actually danced in shoes with rubber soles. Later she would loop the sound of the taps while watching the film and actually dancing on a tap board to match her steps in the film.

She was known, especially later in her career, for her distinctive appearance, which reflected a studio-era ideal of glamor massive black bouffant hair, heavy makeup with a slash of crimson lipstick, and fashions that emphasized her lithe figure and long dancer’s legs. Her film career effectively ended in 1956 as the studio system lost steam to television, but she remained active in the theater and on television. She starred on Broadway in the musical Mame in 1969, in which she wowed the audience in a tap number created just for her. In 1979 she astounded audiences in the Broadway show Sugar Babies with fellow MGM veteran Mickey Rooney, which toured the United States extensively after its Broadway run. In 1983 she won the Sarah Siddons Award for her work in Chicago theater. 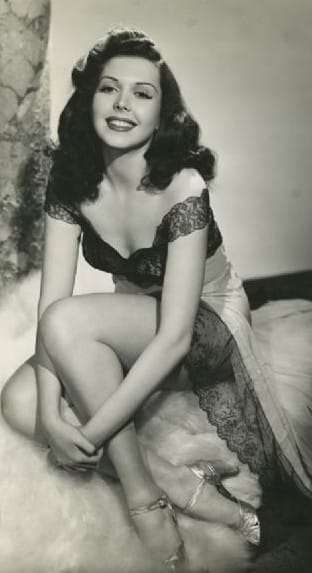 She appeared in a special 1982 episode of The Love Boat, joined by fellow showbiz legends Ethel Merman, Carol Channing, Della Reese, Van Johnson, and Cab Calloway in a storyline that cast them as older relatives of the show’s regular characters. In 2001 she took her last role, playing Coco in auteur director David Lynch’s critically acclaimed Mulholland Drive. Her last stage performance was a 1998 production of Stephen Sondheim’s Follies, in which she played the hardboiled survivor Carlotta Campion and received rave reviews for her rendition of the anthemic I’m Still Here.

Ann Miller also performed a guest appearance on the TV series Home Improvement as a dance instructor to Tim and Jill. For her contribution to the motion picture industry, Ann Miller has a star on the Hollywood Walk of Fame at 6914 Hollywood Blvd.

Ann was parodied on Saturday Night Live. She was played by Molly Shannon as a talk show host, with Debbie Reynolds (played by Cheri Oteri), on a show called Legs Up.

She died in Los Angeles, California on January 22, 2004 at the age of 80 from cancer, which had metastasized to her lungs, and was interred in the Holy Cross Cemetery in Culver City, California.